We had been planning to contest one constituency (Barnet & Camden) in the lections to the Greater London Council on 6 May, postponed from last year. However, we decided that covid restrions meant we would not be able to conduct a proper campaign. If you want socialism as a society of common ownership, democratic control, production directly to meet people's needs and not for profit, and access to goods, services and amenities on the basis of "from each their ability, to each their needs" you can do so by using this sticker. Copies available from Head Office at: spgb[at]worldsocialism.org 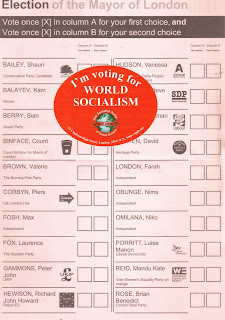 Posted by Mondialiste at 5:48 AM No comments:

Here it is (counted this morning) in Islington

This result confirms that we do better Labour safe seats.

Posted by Mondialiste at 2:47 PM 4 comments:

In view of the smaller electorate and lower turnout 27 votes here is a larger percentage than 28 in Barnes.

For the record, the TUSC candidate in North Bermondsey got 62 votes so, despite their pretensions, they are still playing in the same league as us.
Posted by Mondialiste at 11:28 AM No comments:

Turnout was over 50%. This ward was exceptional in that it is the only ward in Richmond where the Tories won all 3 council seats. The LibDems won at least one seat in every other ward. The Greens' alliance with the LibDems (under which they stood aside in some wards in return for the LibDems only contesting 2 seats in others) gave them 4 seats.

Elsewhere, we know that in Borough & Bankside ward in Southwark the LibDems won all 3 seats and that our candidate got 27 votes. No further details yet. Islington's votes are being counted this morning.
Posted by Mondialiste at 9:58 AM No comments:

All over bar the voting

North London branch report that they had distributed by last Saturday all of the 3000 leaflets they needed to cover Junction ward in Islington. West London had also distributed 3000 by last Saturday, mostly in Barnes ward but all in the Barnes area of Richmond. South London distributed between 1000 and 2000 of the 2000 they ordered, all in Southwark but not all in Borough & Bankside ward which contains many council blocks which cannot be accessed easily. A couple of hundred were distributed yesterday at a May Day rally in Clerkenwell, which is actually in the borough of Islington though of course most of the marchers will have come from all parts of London, not that that really matters. A few replies to the leaflet (which contained a cut-off Freepost reply coupon) have already been received.

In Southwark one of the Tory candidates in London Bridge & West Bermondsey ward has died, meaning that the election there has had to be called off and will now take place on 14 June. As this is the ward next to the one we're contesting any leaflets left over could be distributed there.

Tomorrow two of our candidates, since they live in their ward, can "vote for themselves for a change"; which is what we advocate all voters to do.
Posted by Mondialiste at 7:02 PM 3 comments:

With the farmers in Barnes

Two members at the stall in Barnes yesterday. We started early as the Tories and LibDem/Greens (with a joint stall) were already there when we arrived at 11.30. Finished early too, at 1pm, when the Farmers Market ended and they went.

Some passers-by told us they had already received our leaflet through their letterbox. A Tory backwoodsman told us to "go back to Russia". We suggested that they did as Russia was now capitalist even by their standards as opposed to the state capitalism it was with the USSR. Another, a rather more up-to-date, Tory remembered an active SPGB group at UCL in the 1980s. Met a couple of Labourites. They are standing here but are not running any sort of campaign and will only have put up candidates to give their supporters a chance to vote for what they want -- a quite legitimate reason, one of the reasons we are standing too. As Eugene Debs put it, it is better to vote for what you want and not get it than to vote for what you don't want and get it.

Afterwards, we distributed some of the surplus leaflets in another part of Barnes not in the ward.
Posted by Mondialiste at 1:36 PM No comments:

As we suspected from the LibDems putting up only 2 candidates and the Greens only 1 for the 3 council seats in Barnes ward (four years ago they each put up 3 candidates), they have done an electoral deal. As this is sort of historic in terms of conventional politics, we record what an item in a leaflet distributed in the ward says:

Of course this is just two reformist parties getting together and won't make any difference to solving problems the excluded majority face under capitalism or to the way capitalism operates, and must operate, to put profits before people. As an outgoing LibDem councillor, Penny Frost, noted in another leaflet distributed in Ham, Petersham & Riverside ward:


Even housing associations are now more interested in speculative development than in looking after their elderly and vulnerable tenants.


What do you expect? That's the way of the capitalist world.
Posted by Mondialiste at 8:28 AM 1 comment:

The case not the face

Here is the article and photo from yesterday's Southwark News mentioned in the last blog:

By contrast, today's local Richmond paper, The Richmond & Twickenham Times (which has become a real rag compared with what it used to be), has nothing whatsoever on the elections. When they mentioned them a couple of weeks ago they got their facts wrong and had to publish a correction last week (they said there were no Labour councillors in Richmond whereas there were two, defections from the LibDems to Corbyn, though it's true there won't be any after next week).
Posted by Mondialiste at 8:27 AM No comments:

Southwark seems to be the place. Last Thursday our candidate, Kevin Parkin, attended a hustings organised by the Bankside Residents Forum. He reports that it was an acrimonious meeting with the Labourites and LibDems playing the blame game about housing. He was able to make the point that in a capitalist society houses are built for profit not social use, hence the problems. On Monday morning this week there was another hustings, organised by the Southwark Pensioners Action Group. Our candidates always get a good reception at such meetings; quite a few leaflets handed out.

Today's Southwark News has photos of all the candidates, including ours standing next to our logo (a compromise between competing points of view in our party between those who say we should supply a photo when asked and those who say we should only send a logo -- in Lambeth we used to provide a photo of Danny Lambert speaking off our platform with the website address showing). Also, a short statement of what we stand for: a society of common ownership, democratic control, production to satisfy people's needs not for profit, and the principle "from each according to their abilities, to each according to their needs".

No report of hustings in Islington or Richmond. Leafletting has continued in both places. In fact whole of Barnes ward except for some mansions (and blocks of flats you can't get into) has now been leafletted. 400 of the 3000 ordered left over but branch members should be able to distribute more at the street stall in Barnes (Church Road) on Saturday from 12 noon to 2pm.
Posted by Mondialiste at 6:35 PM No comments:

The establishment of a system of society based upon the common ownership and democratic control of the means and instruments for producing and distributing wealth by and in the interest of the whole community.

Do you want a society of common ownership and democratic control?